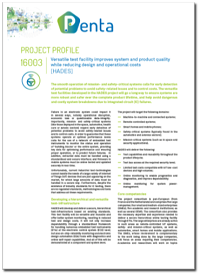 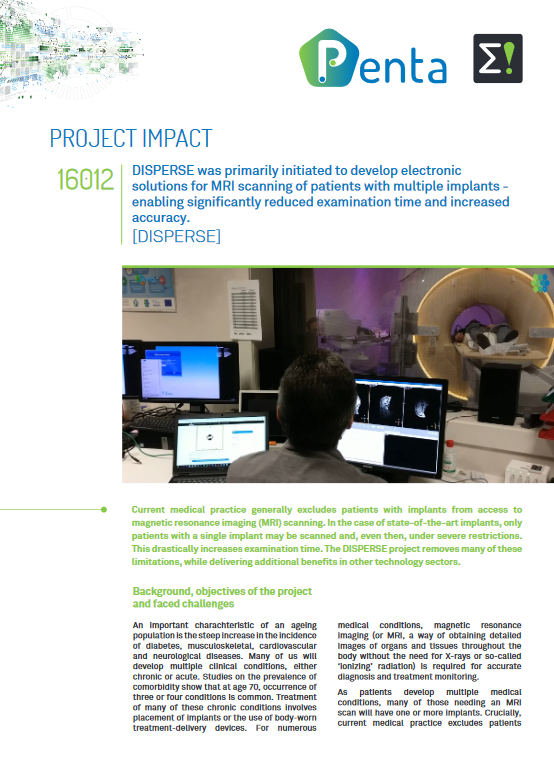 Current medical practice generally excludes patients with implants from access to magnetic resonance imaging (MRI) scanning. In the case of state-of-the-art implants, only patients with a single implant may be scanned and, even then, under severe restrictions. This drastically increases examination time. The DISPERSE project removes many of these limitations, while delivering additional benefits in other technology sectors.

Background, objectives of the project and faced challenges

An important charachteristic of an ageing population is the steep increase in the incidence of diabetes, musculoskeletal, cardiovascular and neurological diseases. Many of us will develop multiple clinical conditions, either chronic or acute. Studies on the prevalence of comorbidity show that at age 70, occurrence of three or four conditions is common. Treatment of many of these chronic conditions involves placement of implants or the use of body-worn treatment-delivery devices. For numerous medical conditions, magnetic resonance imaging (or MRI, a way of obtaining detailed images of organs and tissues throughout the body without the need for X-rays or so-called ‘ionizing’ radiation) is required for accurate diagnosis and treatment monitoring.

As patients develop multiple medical conditions, many of those needing an MRI scan will have one or more implants. Crucially, current medical practice excludes patients
with one or more ‘standard’ active implantable medical devices (AIMDs) from access to MRI treatment, because MRI scanners need to use (electro-) magnetic fields which are far stronger than those encountered in everyday life. This causes serious health inequalities for a rapidly growing group of patients. Recent developments allow the scanning of patients with a single, so-called state-of-the-art implant, but under strict and limiting conditions. Unfortunately, these restrictions significantly increase the typical examination time.

DISPERSE’s key objective was to develop the electronic means of reducing examination times of patients with multiple implants by a factor of three, while also improving scanning accuracy compared to the current state-of-the-art, all in a clinical hospital setting.

DISPERSE has achieved its main objective by developing advanced electronics for spatially distributed sensor and transducer arrays. Methodologies for multi-implant testing have also been developed.

These sensing networks also have a large application potential in other markets, notably in smart cities and space communications. In particular, DISPERSE demonstrated potential applications in radio telescopes and the acoustic surveillance of public space.

As well as advances in the MRI systems themselves, DISPERSE has developed complementary innovative materials and demonstrators for active implantable medical devices (AIMDs) which cause less interference with the MRI image and pose less constraint on the maximum MRI fields. It has also developed miniaturised RF signal conversion and transmission electronics, including power transmission, in order to triple or quadruple the number of RF sensors covering the anatomy of patients. With appropriate image processing this has reduced MRI acquisition times and improved accuracy. Methodologies for multi-implant testing have also been developed.

Next to innovative building blocks for AIMDs and MRI, an acoustic observation system has been developed which can be used to detect if a patient being scanned is stressed, adding essential safety monitoring to the scanning process. Acoustic observation also has a huge potential in the cross-functional domains of smart cities, smart homes and automotive.

The implementation of an array of sound cameras enable major breakthroughs in the emerging market of audio monitoring and analysis for smart home (home care) and smart city applications, where there will be greater emphasis on the audio capabilities of video surveillance systems.

Synergy has been found also in the space domain were innovative radio telescope arrays have identical needs for advancement in components for signal conversion and transmission. The new communication module developed in DISPERSE is being used to build future satellite-based space telescopes, with much more efficient communication capabilities. It is expected that eventually about 100,000 antennas will be used in the space telescope, each of which will be equipped with the communication module that has been developed in the DISPERSE project.

DISPERSE has developed innovative technology for the healthcare market. In 2026, the MRI market is expected to expand to €10.6 billion (+63% versus 2017). Simultaneously, the implant market has increased by 71% in 2015-2020, according to US data. The increasing likelihood that someone aged 70 and above will require an MRI within the next 10 years could drive the double-digit CAGR (compound annual growth rate) for DISPERSE AIMDs, leading to a total market size of €6.9 billion in 2020.

Alongside the individual benefits identified above, this new technology can be combined with other developments to cause even greater impact. For example, there are over 480,000 people in the US and EU who rely on using wheelchairs due to their spinal injuries and this list grows by around 24,000 annually. A new medical breakthrough, however, has given some paraplegic patients the ability to regain control of their lower limbs. This is thanks to a paddle lead that is inserted into the epidural space and connected to an implantable pulse generator.

This medical miracle originates from the FP7 project NEUWalk and has been brought closer to real implementation through three EUREKA funded research & development projects (DISPERSE, RESTORE and WALKAGAIN) that built upon each other to create the new technology.

To monitor the progress of restoration in these patients, MRI is an essential tool. Unfortunately, mostly patients are still excluded from MRI scanning if they have an implant. Exploiting the digital technology developed by the ENIAC project CSI and the insights from ECSEL DeNeCoR, the DISPERSE project improved scanning of patients with implants and allowed optimal performance of implantable parts – so patients can walk again.

The miniaturisation and digitisation of medical implants not only supports the MRI scanning requirements of the future but also enhances the medical options available to patients.

These are only a few examples of how DISPERSE, independently and in partnership with other developments, is helping address some of the critical issues raised as we tackle the challenges of supporting an ageing society and developing advanced medical capabilities.

In other areas, secure acoustic monitoring compatible with harsh environments can, for example in Smart Cities, provide the potential of increasing the safety of citizens, through the rapid detection of incidents and resulting deployment of the emergency services.

In terms of supporting advanced research, the deployment of space telescopes with significantly enhanced communication capabilities has the potential to allow researchers to extend the boundaries of our knowledge more rapidly.

This combination of technology developments has provided all the industrial partners opportunities for commercial development. The industrialisation of several components and sub-systems has been enabled through the project and is only expected to accelerate as further applications are developed and market opportunities exploited.

For legal acceptance of scanning patients with implants standardisation is essential. The project team joined forces to speak with one voice in several standardisation communities such as IEC and ISO. In addition, a joint recommendation has been made to the US Food and Drug Administration (FDA) draft guidance on Testing and Labelling Medical Devices in the Magnetic Resonance (MR) environment.

For the general public 15 videos have been published on YouTube with more than 10.000 views through LinkedIn. DISPERSE delivered over 20 papers, presentations and contributions to courses and was present at 14 conferences and workshops. Six patents are pending.

DISPERSE delivered exciting results which, in the short term, will be exploited in new and improved products, in healthcare, in smart cities and in space applications. New business relations have been established or strengthened and new joint projects to further advance miniaturization of MR compatible electronics are in preparation. Production of opto-electronic integration is being ramped up. For verification and validation of artificial intelligence enabled by DISPERSE components a collaborative project, IVVES, has been started within the EUREKA ITEA3 programme.