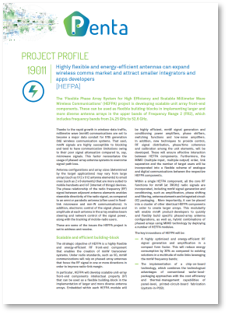 Systems and Components: Architecture, Design, and Automation
Connectivity and Interoperability

Thanks to the rapid growth in wireless-data traffic, millimetre wave (mmW) communications are set to become a major data conduit for fifth generation (5G) wireless communication systems. That said, mmW signals are highly susceptible to blocking  and tend to have communication limitations owing  to their poor signal attenuation compared to, say, microwave signals. This factor necessitates the usage of phased-array antenna systems to overcome signal-path loss.

Antenna configurations and array sizes (determined by the target applications) may vary from large arrays (such as 512 x 512 antenna elements) to small ones (such as 2 x 8 elements) that are more suited to mobile handsets and IoT (internet of things) devices. The phase relationship of the radio frequency (RF) signal between adjacent antenna elements enables steerable directivity of the radio signal, as compared to an omni or parabolic antenna (often used in fixed- link microwave and mm-W communications). In addition, electronic control of the signal phase and amplitude at each antenna in the array enables beam steering and network control of the signal power, along with the tracking of mobile-radio users.

These are some of the issues the HEFPA project is set to address and resolve.

The strategic objective of HEFPA is a highly flexible and  energy-efficient  RF  front-end  component  that enables the creation of mmW transceiver systems. Under radio standards, such as 5G, mmW communications will rely on phased-array antennas that focus the RF signal in one or more directions in order to improve radio-link margin.

In particular, HEFPA will develop scalable unit-array front-end components intellectual property (IP) that can be used as a flexible building-block in the implementation of larger and more diverse antenna arrays. Embedded within each HEFPA module will be highly efficient, mmW signal generation and conditioning power amplifiers, phase shifters, switching   functions   and   low-noise    amplifiers. In addition, new  techniques  to  provide  control,  RF  signal  distribution,  phase/time  coherence   and calibration among the unit elements, will be developed. These will ensure effective interaction between HEFPA components. Furthermore, the MIMO (multiple-input, multiple-output) order, link separation and the number of target users will be incorporated into a flexible scheme of analogue  and digital communications between the respective HEFPA components.

Within a single HEFPA component, all the core RF functions for mmW (at 39GHz) radio signals are incorporated, including mmW signal-generation and conditioning, such as amplification, phase shifting and filtering, antenna elements and integrated circuit (IC) packaging. . More importantly, it can be placed into a cluster of other identical HEFPA components in order to create larger  arrays.  This  modularity will enable mmW product-developers to  quickly  and flexibly build specific phased-array antenna configurations, as well as, hybrid combinations of phased arrays using MIMO technology by deploying a number of HEFPA modules.

The key innovations of HEFPA will be:

There will be two main project deliverables:

The HEFPA project consortium will leverage its partners’ strengths in use- case definition, IC design, packaging and system engineering in order to implement the core HEFPA building-block. Their expertise will also be used in deploying the antenna elements in various phased-array and hybrid-beam-forming configurations.

HEFPA will deliver a competitive advantage by combining several key component-innovations  into  a  single RF front-end. Furthermore, this fully integrated assembly will also combine an innovative design with the best attributes of IC and low-loss packaging and thermal management to offer an additional advantage over other approaches.

Target markets will be  very  broad  in the sense that any use-case, which is going to be reliant upon high-bandwidth and large data-throughput wireless communications, will benefit from being able to deploy HEFPA components in building phased arrays. Commercial impacts are primarily time-to-market, flexibility (including reuse of supporting infrastructure) and low energy consumption.

Significantly, the HEFPA IP and components will also reduce complexity in the formation and deployment of mmW radio-links, thereby expanding the market reach of data communications using this allocated band of RF spectrum. This will enable smaller system integrators and RF application developers to use HEFPA components to quickly build flexible phased-array antennas (with  all the associated RF generation and signal-conditioning circuitry) using the upper band of FR2 frequency-bands (as allocated in each regional jurisdiction). New applications that will leverage high- bandwidth wireless communications will also be made possible through HEFPA components. Finally, regarding future market numbers, we see that existing mmW base-station and point-to-point systems have unit deployments of, perhaps, several 100,000 systems per year. In contrast, consumer- grade cellular or WiFi systems have a market size of over one billion radio systems per year. It is anticipated that mmW-based radio handsets, for example, will be over 100m units per year by 2022. Even larger markets are anticipated for VR/AR (virtual reality/ augmented reality) systems, which leverage mmW radio systems for very-high-bandwidth data applications.