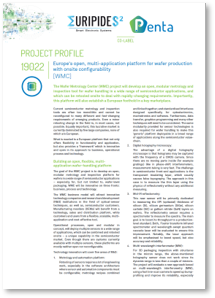 The Wafer Metrology Center (WMC) project will develop an open, modular metrology and inspection tool for wafer handling in a wide range of semiconductor applications, and which can be retooled onsite to deal with rapidly-changing requirements. Importantly, this platform will also establish a European foothold in a key marketplace.

Current semiconductor metrology and inspection tools are often too monolithic and cannot be reconfigured to many different and fast-changing requirements of emerging products. Even a minor retooling change in the field is, in most cases, not possible. Equally important, this lucrative market is currently dominated by five large companies, none of which are European.

What is needed is a European platform that not only offers flexibility in functionality and  application, but also provides a ‘framework’ which is innovative and open in its approach to business, operational process and technology.

The goal of the WMC project is to develop an open, modular metrology and inspection platform for wafers in a wide range of semiconductor applications – especially for, but not limited to, wafer-level packaging. WMC will be innovative on three fronts: business, process and technology.

The WMC business model will attract innovative technologycompaniesandresearchanddevelopment (R&D) institutions in the field of optical-sensor techniques, as well as, semiconductor customers. Manufacturing resellers (OEMs) will benefit from a technology, sales and distribution platform, while customers and users from a flexible, scalable, multi- application and cost-effective tool.

Operational processes, open and modular in concept, will deploy multiple sensors in a wide range of applications, which can be combined and retooled onsite – a unique capability in the semiconductor market. Even though there are systems currently available with multiple sensors, these platforms are mostly neither open nor reconfigurable.

Retooling of sensors requires a lot of engineering work, especially in the software architecture where sensor and automation components must be configurable; metrology recipes combined and linked together; and standardised Interfaces designed specifically for optoelectronics, mechatronics and software. Furthermore, data transfer, graphics programming and many other techniques will need to be considered. The same modularity provided for sensor technologies is also required for wafer handling to make this ‘generic’ platform deployable in a broad range of applications along the semiconductor value- chain.

The advantage of a digital holography microscope is that holograms may be captured with the frequency of a CMOS camera. Since there are no moving parts inside (for example gratings) like in phase-shift interferometers, measurement-taking is very fast. The challenge in semiconductor front-end applications is the transparent insulating layer, which usually causes false topography. The approach in this case is to measure the thin layer using the physics of reflectometry without any additional measuring.

This new sensor  will  be  primarily  dedicated to measuring the EPI (epitaxial) thickness of silicon (Si), silicon germanium (SiGe), silicon carbide (SiC) or gallium nitride (GaN) layers on wafers. The reflectometry sensor requires a spectrometer to measure the spectra. The main goal is to boost its throughput to a production- level standard. Both, Fourier transform infrared spectrometer and wavelength-swept quantum cascade laser will be evaluated to ensure this improvement. Notably,  the  laser  approach will be emphasised to boost speed, but also accuracy and reliability.

For 3D packaging  inspection  with  structures in the micron range, the above-mentioned holography sensor does not work since its dynamic range is less than a couple of microns. The project will evaluate a new approach based on multi-wavelength interferometry (MWI), using a fast line-scan camera to speed up bump- profiling and improve its reliability, especially for the smaller µ-bumps. With this approach, the throughput can be increased significantly, and wafer- scanning to within one minute is made possible. Recently announced multi-line cameras should make this throughput-target possible.

Aspect ratios, especially in the advanced-packaging market, are growing constantly. At the same time,   resolution   requirements have reached levels around single microns, causing a principle issue with state-of-the-art camera techniques, limited in DOF by physics principles. Today, no system available can provide  extended  DOF while maintaining resolution. The project will extend the DOF of   a camera-based  imaging  product by a factor of about 10, compared  to currently  available  cameras. This will be achieved without any moving mechanics or liquids. The project aims to improve inspection performance, and especially 2-dimensional metrology for high aspect-ratio structures. A proof of concept has already been developed for this innovative optical system. It comprises a lens column, a mounted camera, and includes proprietary image-processing algorithms.

In a nutshell, the project aims to deliver Europe’s first open platform for metrology and inspection in the semiconductor industry that, at its launch, will already address nine different optical sensor technologies. It will deploy four new sensor technologies in combination with five existing ones, and aims to be open to further additions in the future. The platform will cover an extensive variety of wafer-manufacturing applications, including front-end, back-end, and packaging metrology and inspection ones. WMC will also be unique since current metrology tools do not have the flexibility to be retooled in case of changing requirements,. What is more, WMC will allow European companies to compete in this important marketplace. Another key spin-off is the globalisation of intellectual property of scientists and engineers participating in semiconductor fabrication. This project will also create a symbiosis-like ecosystem of technology exchange, from which every project partner will benefit.

Standardisation is also key to this project, considering a critical project objective is to position the WMC platform as an open, highly standardised and flexible platform to a growing community of European (metrology) sensor-providers.

Crucially, building a product which faces competition dominating the current semiconductor metrology and Inspection market, also calls for a project consortium with the right experience, expertise and building blocks to collectively meet the technological and business challenges the WMC project faces.

State of the market

Five companies dominate the current US$ 6 billion semiconductor metrology and Inspection market, with a combined share of 87% in 2017, up from 75.3% in 2002, as the market consolidated from 37 companies to 20.

WMC’s potential market can be divided into five main application groups: 1) layer metrology; 2) 3D surface metrology; 3) wafer geometry; 4) 2D Inspection;  and 5) high-throughput 3D packaging inspection. The WMC project is expected to generate new opportunities for applications in various other fields also requiring the highly configurable, cost- effective WMC platform. Potential growth for project partners in a new market segment is US$ 600m, based on current conditions, growing with a 10% CAGR to US$ 880m in 2022. Importantly, the WMC project’s legacy will include an ecosystem of European high- tech companies and research centres that will continue to collaborate beyond the completion of this project.